The Walking Dead: Saints and Sinners

TWD: S&S is a VR game set in New Orleans a few years after the outbreak. I was the lead UI/UX designer on the project developing the user experience, design the visuals, and implementing them. This was my first foray into developing for VR and there were a lot of interesting user experience issues that needed solving. I spent a majority of my time working on the user experience/testing and implementing while getting some much needed help from concept art on the visual assets. The game is available on Oculus, Vive, Valve, and PSVR and currently holds an 81 on Metacritic.

From the beginning, we went with the idea that the idea needed to be non-diegetic where it made sense, but mid-development we realized that was constraining us so we pivoted. We now have a good balance of both. I spent a lot of my time writing documentation, prototyping, testing, and iterating on interactions. I was able to create wire frames for some of our big features which really helped nailed down what was important for game play. I’m super proud of this game and the team. A lot of hard work was put in to make this game a reality (har har har) and it currently holds an 81 Metacritic score!

There is so much to show but because it’s VR, it’s better to see it in action. I’ve created a small TWD:SS UI playlist on YouTube showcasing the game and UI on the Oculus Rift S. It’s not entirely complete but I hope to do so soon!

The amazing Naomi Kyle visited us at the studio to play the game and spoke to both our Animation Lead and myself. Check out my cheesy interview where I ramble about all things UI 🙂 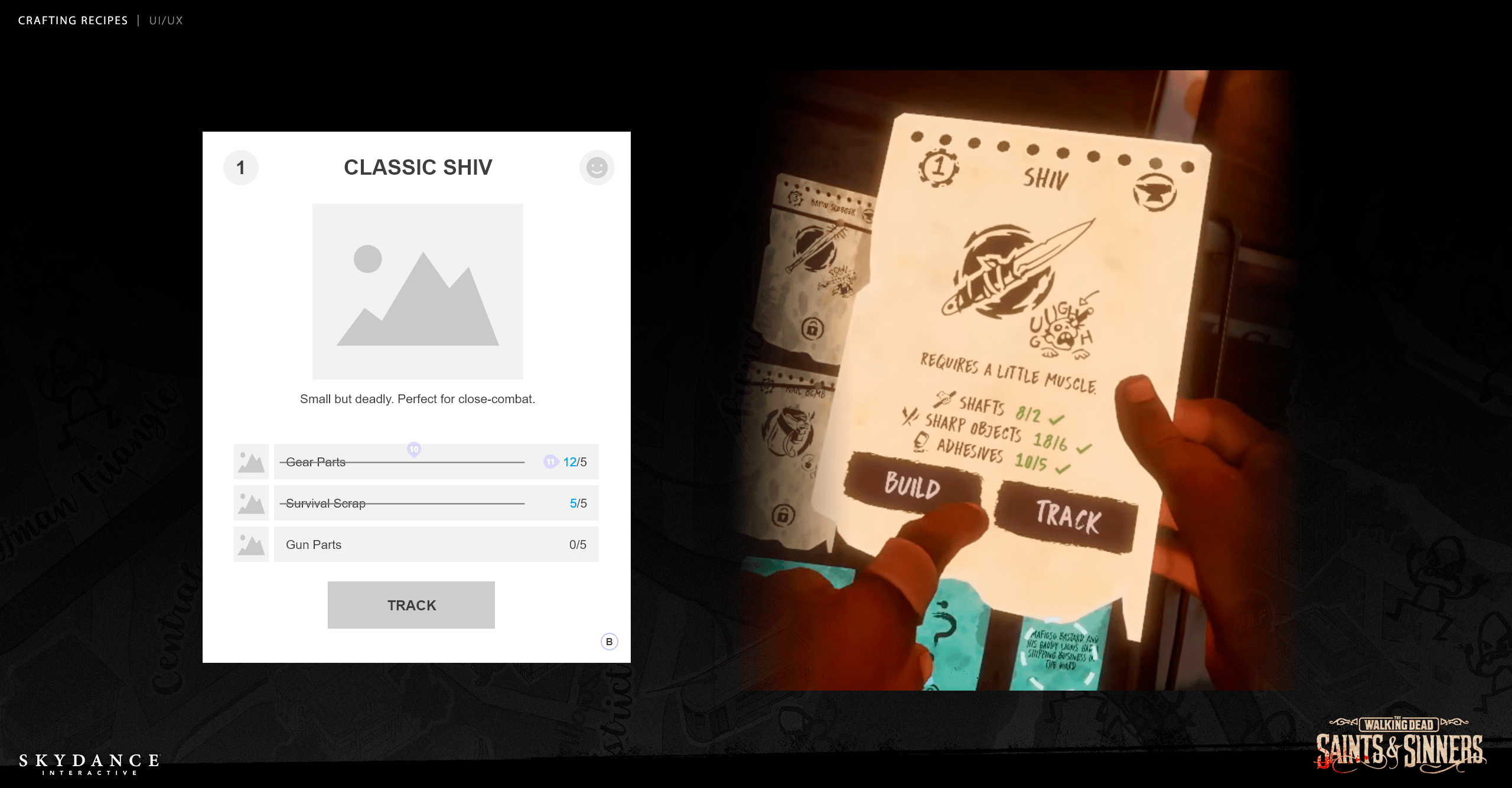 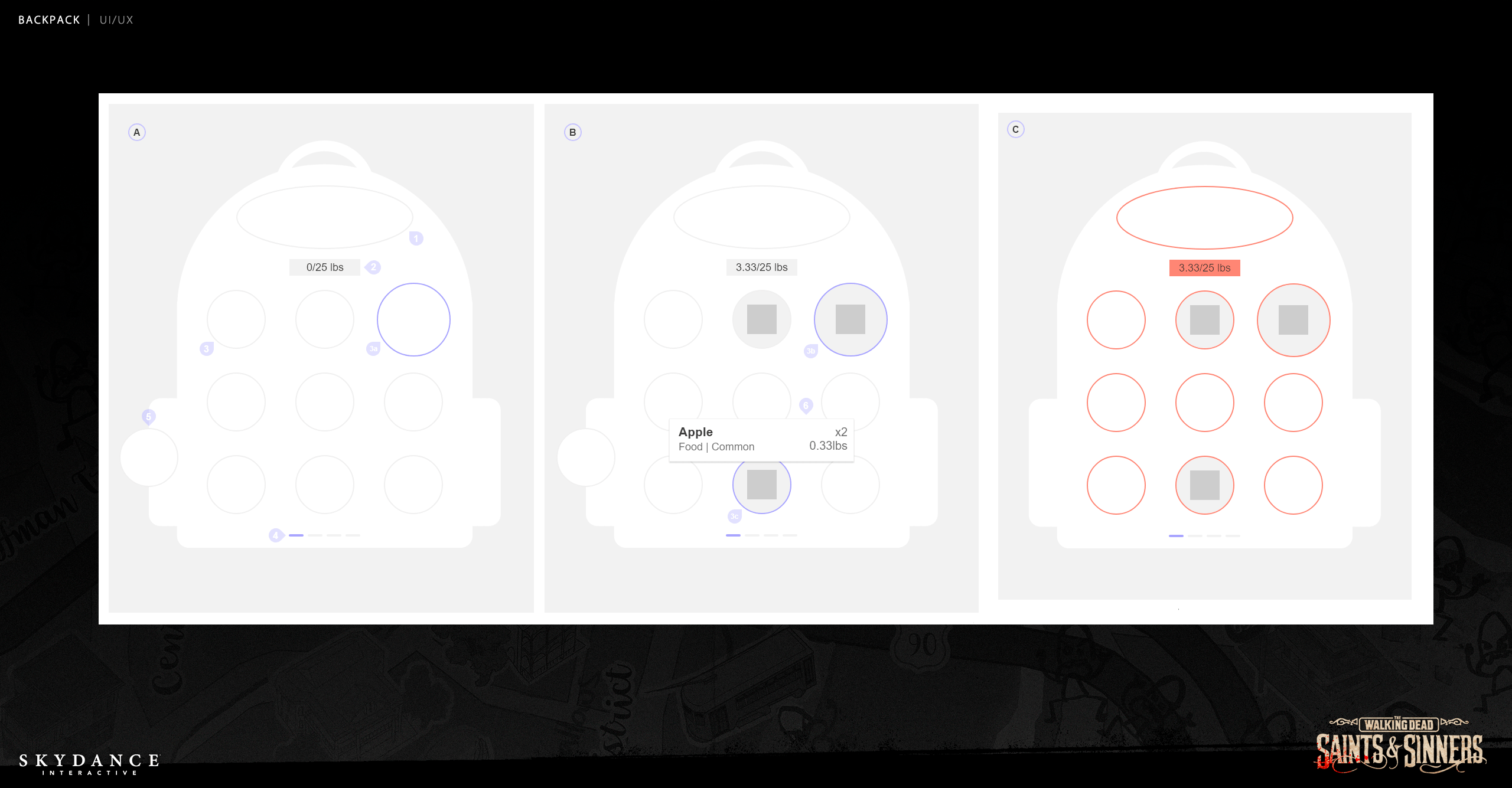 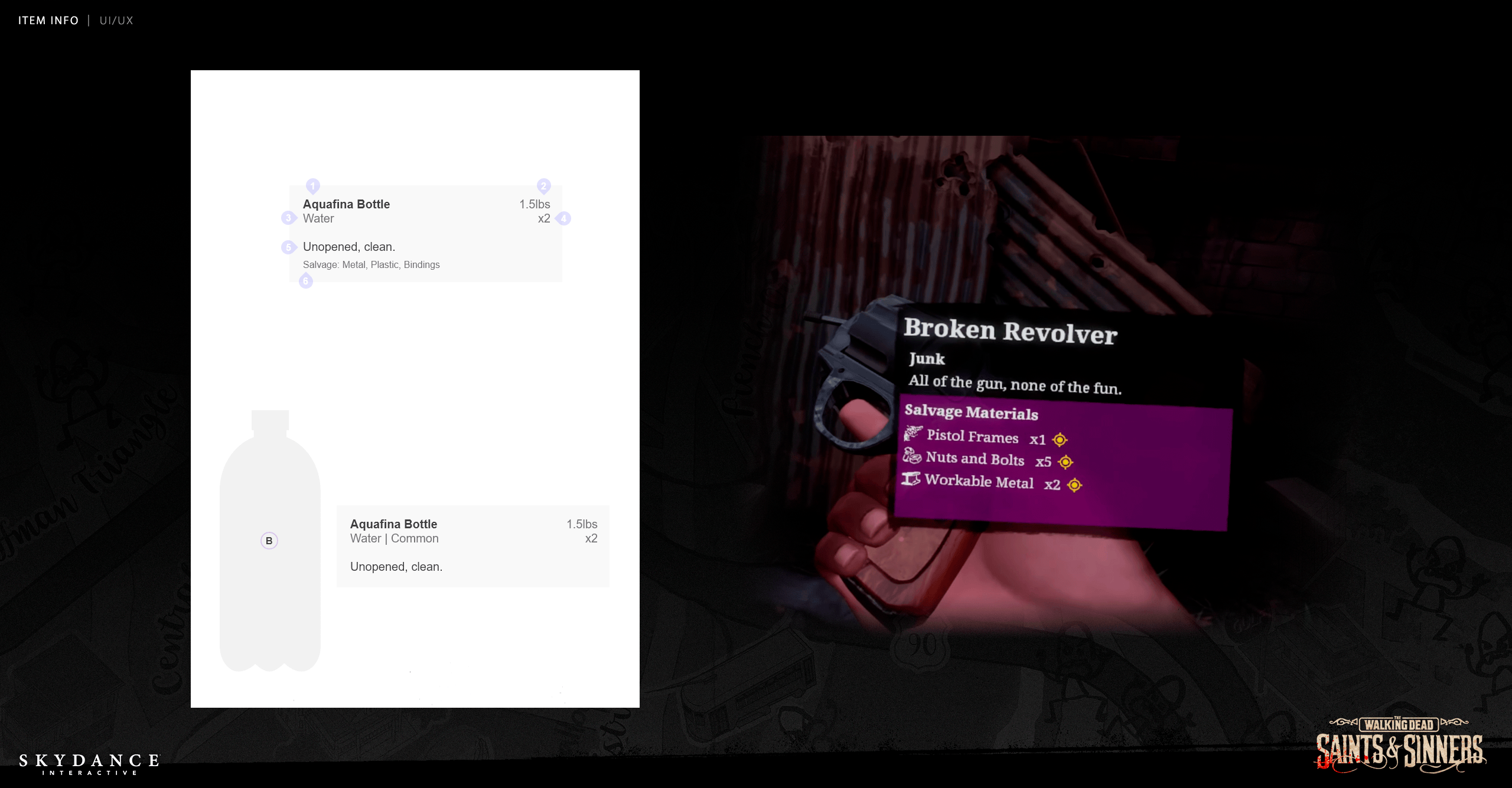 For the Pause menu, I took a little time out to hook up a small, simple little prototype using Adobe XD’s features: Pause Menu Prototype. There is a small little interactive prototype for how Collected Notes work here: Collected Notes Prototype. The front-end menu was one of the last major thing we scrambled together during the last two weeks of production, before shipping. We re-used a lot of the pause menu widgets and were able to re-skin it for the front-end. There is some still work that needs to be done and I’d like to eventually match it to the pause menu. 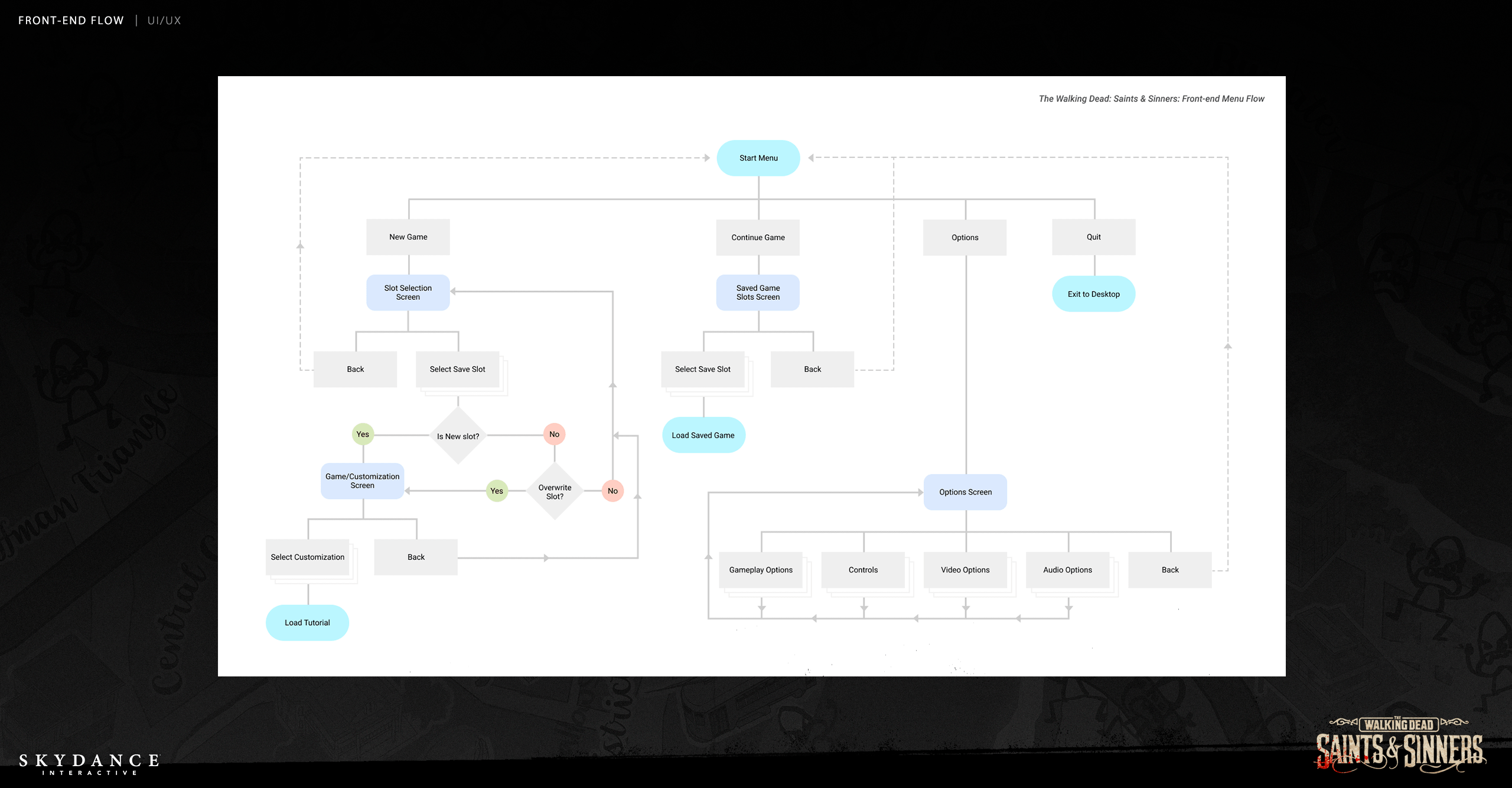 The Journal is an important feature of the game since it gives the player access to their tasks, their tracked recipes, inventory, maps, and more. We definitely wanted this part to be more non-diegetic and felt like it was part of the world. In the beginning, we had animated flipping pages but it became more of a headache so we removed them. I think the results are a good compromise between functionality and usability.

The Stash sits inside the player’s bus and is a place where players can store and organize their inventory. Players may also salvage their items in the recycling bin, breaking them down into materials they can use to craft with. 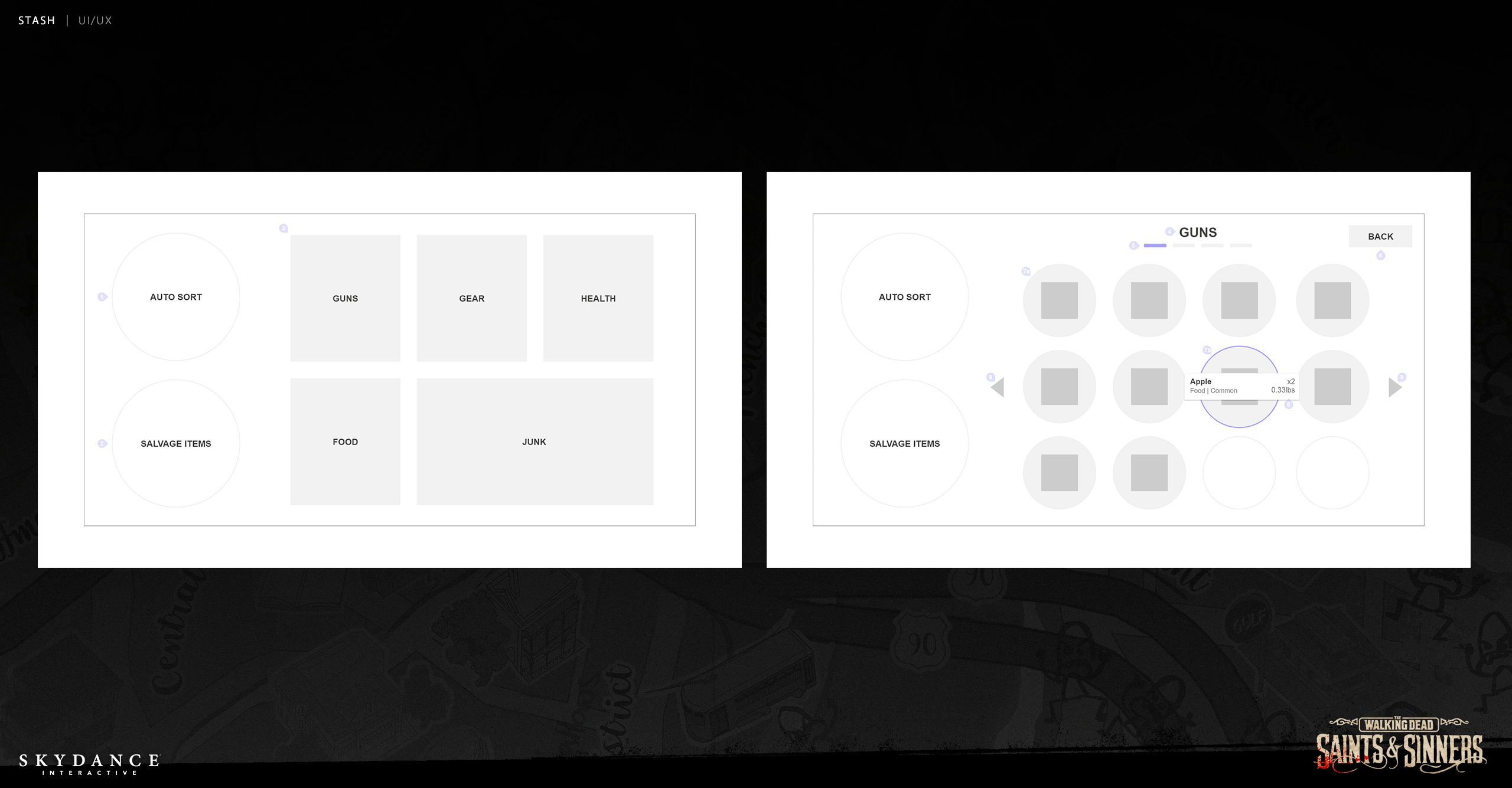